As you probably know, you can do some pretty cool reporting stuff with Service Manager 2012 by using data cubes. Data cubes allow IT staff to get relevant information by using Excel to slice and dice data from SCSM data warehouse.

If you like to learn more about data cubes in Service Manager, check out this helpful series of blog posts by Marcel Zehner

However, lately I faced the problem that current data was missing. As you may have read in the above posts, there exist some data warehouse jobs which are responsible of processing these cubes regularly so that they contain current data.

In my case Service Manager was unable to run these jobs which of course caused reporting not being available for the days the jobs were not running. Starting the cube processing jobs manually unfortunately did not help. I just got the following error message, saying that no resource for the specified culture or neutral culture could be found. 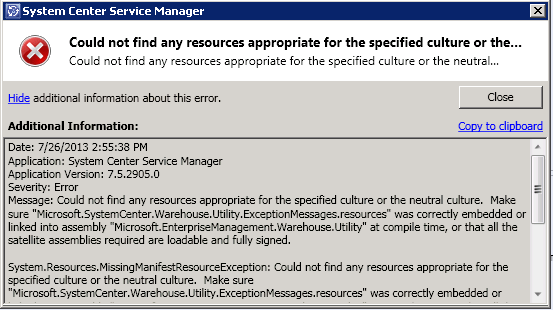 Stopping and restarting the Data Warehouse jobs did not help in any way so I had to dig a bit deeper.

I noticed that every time I restarted the deployment of a failed Management Pack, the following error and warning messages in the Event Log of the Data Warehouse Management Server appeared.

The errors state that a table already has a primary key defined on it.

A quick internet search discovered that this error was known and happened in some environments after the installation of Service Pack 1 but mostly the System Center Data Warehouse Base Library Management Pack is affected. It seems that the MP Sync process tries to create a Primary Key although one already exists, which causes the sync to fail. There exists a Microsoft KB article which describes how to resolve the issue by running a query on DWRepository database to get the some SQL scripts which will drop and add constraint of the primary key of fact tables on DWRepository database. However, since System Center Data Warehouse Base Library was synced properly I did not use the script provided by Microsoft in this case.

In my case I had to drop about 20 different PK’s to get rid of the first bunch of error messages. Try to redeploy a failed Management Pack afterwards. Because of the dependencies of Management Packs it could happen that you will see some new errors caused by other Management Packs. After a while and some redeployments you should see that more and more Management Packs deploying properly to the data warehouse.

Just when I thought it was over, another error message popped out in the event log when I tried to sync a Cube Library Management Pack (like Service Manager Configuration Management Cube Library) 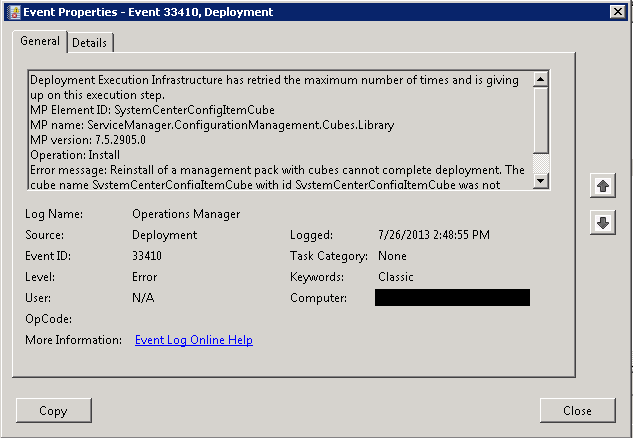 This one was pretty clear in saying that the existing Data Cube has to be deleted. This can easily be done with the SQL Management Studio. Fletcher Kelly wrote a nice blog post on how to recover from this error. 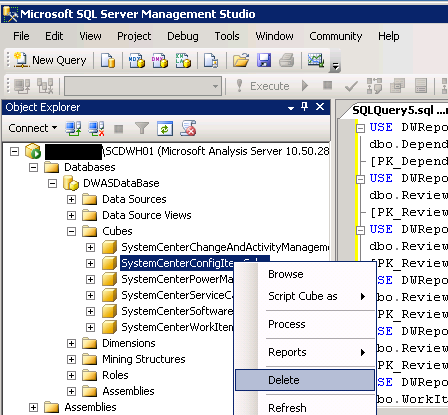 Finally all the Management Packs were deployed properly to the Data Warehouse and after processing the data cubes, current data was available. By the way: Did you notice the last processed date after you started the deployment of a cube which was previously deleted in your SQL database? ;-)